Organisation of the Swiss Abroad (OSA)

Normally we meet in the Rathaus in Bern for our spring meeting. One year ago the March 2020 CSA meeting was one of the first cancellations due to the pandemic (Covid it is now lasting over a year). The meeting was well organised - so just another zoom meeting on a Saturday.

From a UK point of view: UK delegate

delivered the final report of the task force on representativity of the organisation of the Swiss Abroad which now has procedures how to elect its delegates from all Swiss Abroad in their respective countries.

was leading a task force on representation of the Swiss Abroad in national parliament and their report was presented by one of his colleagues. 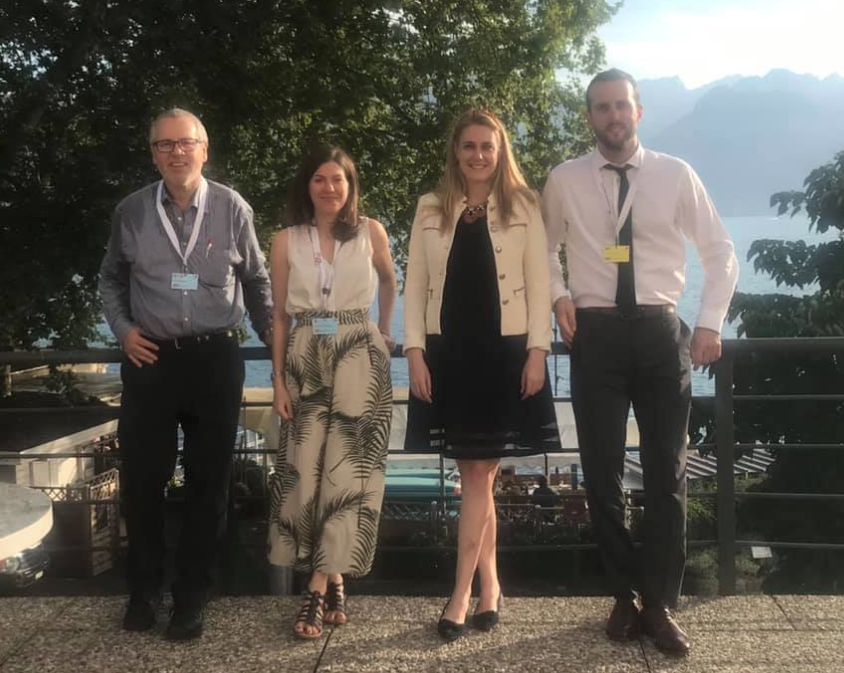 Four out of the five UK CSA (Council of the Swiss Abroad) attended the 2019 Congress in Montroux.

98 Delegates from all over the world assembled for the meeting of the Council of the Swiss Abroad (CSA), chaired by the OSA president, Remo Gysin. The Congress started with a video created by our UK delegate Nathalie Chuard, showcasing delegates of the CSA.

The main topics on the agenda were e-voting and the framework agreement between Switzerland and the EU.

Our UK delegate Vincent Croset also gave an update regarding his working group which sought to put in place a permanent representation of Swiss abroad in the National Council. Whereas the current Parliament does not seem to agree with this idea, there is hope that the new Parliament that will be elected this October will be more open about this question. Meanwhile, the group will explore other paths to make the voice of the Swiss abroad heard in Parliament.

OSA further decided to support its members who are candidates for the coming National Council elections in September 2019.
You can view the recommendations here: https://www.aso.ch/fr/politique/elections-2019/recommandation-electorale

Swissinfo has also announced that it has released a new app, called SWI plus, and which can be downloaded from the Apple store or Google Play.

Our own delegate, Franz Muheim, participated in the electoral roundtable, in his function as candidate on the Green Liberal Party list (Zurich) in the upcoming National Council elections. He was joined by representatives from the Socialist Party, the Greens, the CVP, the BDP, the FDP and the SVP.

The afternoon discussions were around the topic of “What world for tomorrow?” with Federal Councillor Ignazio Cassis (Head of the Department of Foreign Affairs of Switzerland) giving the opening speech (pictured below). The topics discussed covered a range of futurefocused issues including climate change, tourism in the numeric era, and the future of work.

Of note here as well that Vincent Croset presented on the “Human of tomorrow”, where he gave a very interesting presentation regarding the future of mankind in the age of genetic engineering.

At the next OSA Congress in Autumn 2021 in Lugano, the new representative CSA Delegates will be introduced and start their 2021 - 2025 term.

Keep an eye out for the Council of the Swiss Abroad (CSA) Delegates Elections taking place - the UK's elections will run from the 30th November 2019 - 19th June 2021 where the elected UK Delegates will be ratified at the FOSSUK 2021 AGM. 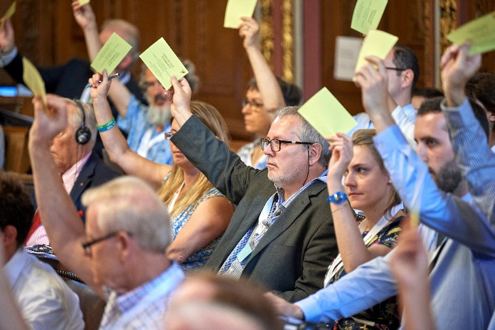 UK Delegates in action - voting at an OSA Congress.

Elections for the five UK delegates for 2021 - 2025 are ongoing. The call for candidates had gone out at the beginning of December 2019 and candidates have already submitted their CVs and eligible ones verified by the Swiss Embassy London.

A full profile of each of the candidates can be viewed here https://www.swiss-societies.co.uk/candidates

And from 20 April - 20 May, it is your chance to vote for the next 5 Delegates who will represent the UK on the Council of the Swiss Abroad for the next term. Find out how to vote - online is possible for the first time - who is eligible to vote and what the Organisation of the Swiss Abroad contributes to the day-to-day impact of Swiss citizens living abroad on our dedicated Elections page >

The Organisation of the Swiss Abroad (OSA) held it's 97th Congress from the 16th to 18th August 2019 in the beautiful lake-side city of Montreux in Vaud.

The UK was represented by Franz Muheim (also member of the Executive Committee of the Organisation of the Swiss Abroad), Sarah Grand-Clément, Nathalie Chuard, and Vincent Croset.

On 23 March 2019, the delegates of the Council of the Swiss Abroad (CSA) met for their six-monthly meeting at the City Hall in Bern. This short video summarises the main items on the agenda of the meeting.

Watch the video in German: https://youtu.be/lzfkUooMFcs

Watch the video in French: https://youtu.be/M2DTOGZ578k

Have your say
Discuss issues to raise and representation with one of our UK Delegates to the Council of the Swiss Abroad.

96th Congress of the Swiss Abroad

The Organisation of Swiss Abroad (OSA) held its 96th congress from the 18th to 20th August in Visp, surrounded by a beautiful mountain panorama. The UK was represented by our elected Delegates, Franz Muheim (also member of the Organisation of the Swiss Abroad committee), Nathalie Chuard, Loredana Guetg-Wyatt and Vincent Croset. The videos remain available to watch on OSA's our YouTube channel.

97 delegates from all over the world assembled in Visp for the constituent meeting, chaired by the OSA president, Remo Gysin. The main topic on the political agenda was Evoting, followed by an update on the discriminatory banking practices impacting the Swiss abroad.

Lobbying for the nationwide implementation of Evoting is one of the top priorities of OSA. Currently over 750,000 Swiss live abroad, but only 170,000 have registered to take part in the votes and elections in Switzerland. At the moment, only 9 cantons (BS, GE, LU, BE, NE, FR, AG, SG and TG) allow the electronic vote. We are currently experiencing some head winds in the parliament. Critics are concerned about security and a number of parliamentary initiatives have been submitted that might block the progress on Evoting. The delegates of the Council of the Swiss abroad approved in this meeting the launch of an online petition calling for the introduction of Evoting within three years.

Regarding the topic of Bank accounts for the Swiss Abroad, it has become apparent that there are no easy solutions as all parliamentary moves have failed. As communicated at the AGM in Belfast, it is possible for Expats to open Bank accounts at affordable cost at the Geneva Cantonal Bank. If you have taken advantage of this, please send us any (positive or negative) feedback in order to report back to the OSA.

Some interesting developments initiated from our UK delegates:

- The proposal of Franz Muheim’s working group to integrate virtual groups (eg Facebook groups) into OSA has been approved. This is a great achievement and another step forward in modernizing the OSA by reaching more (and probably also younger) Swiss Abroad through Social Media.

- Vincent Croset presented his proposal for a permanent representation of Swiss Abroad in the National Council (such as many other countries already do). There has been a lively debate around this interesting idea and the Council agreed to create an official working group. The working group is expected to present at the next council meeting a proper due diligence and feasibility assessment. 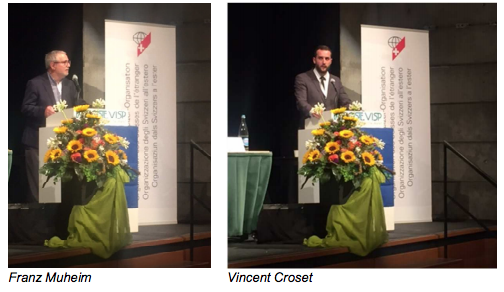 Switzerland’s relations with the European Union have been at the centre of the Congress on Saturday. The keynote speeches of Roberto Balzaretti (Head of the Directorate for European Affairs in the Swiss ministry, picture) and Michael Matthiessen (the EU Ambassador to Switzerland) gave some indications of the delicate situation for both sides about the future of the bilateral accords. Please find the recording of their talks here: https://bit.ly/2MPcSdB. The negotiations are still ongoing and we eagerly await their outcome.

Brexit was mentioned on numerous occasions and it was noted that Berne is closely following what’s happening here in the UK. For further information about the so called “Mind the Gap” strategy, please visit the website of the Embassy: https://bit.ly/2MPcSdB

The Organisation for the Swiss Abroad (OSA), is an independent organisation which is recognised as the advocate of the interests of the Fifth Switzerland.

Organised by the OSA, the Congress of the Swiss Abroad is the annual meeting of the Swiss citizen living all around the world. During this meeting, they have the opportunity to renew with the Swiss current information, to discuss on special themes and to exchange in a friendly atmosphere their own experiences. The Congress is held in German and French.

This Congress takes place each year in August, in a different area of Switzerland, and some 500 compatriots from the whole world come each year to this event. Visits, entertainment and meeting with the authorities and local population are also part of the programme.

Organisation of the Swiss Abroad Flyer

More information is available on the OSA website: www.aso.ch

OSA is organised and run by a highly motivated and skilled team permanent administrative team, the Secretariat for the Swiss Abroad (SSA). Below are the individuals we have previously had the pleasure to meet at our FOSSUK AGMs. You can see a full list of the team on the official Swiss Community website >

© 2021 FOSSUK – Federation of Swiss Societies in the United Kingdom