I have received much news from our Swiss community in the UK during the last weeks. This is always a sign of an enduring vitality that really should motivate us to keep maintaining our culture.

Allow me to give you some examples: thanks to Nathalie Chuard, one of our five really active delegates to the CSA, the Embassy will hold a Jungbüergerfeiern at the end of June for all the young people now old enough to vote. This would have not been possible without the dedication of many people committed to making this happen.

There are also many artists based in the UK who are using their skills as a means to share our culture’s beauty with the locals, such as Iris Hunter who translated a famous Swiss book into English in order for it to be experienced by her British friends. Or the writer Alexandra Lavizzari, the photographer Fiona Bunn, the cartoonist Viki Metzler and many other people who are committed to our community everywhere!

At the end of February the Swiss-UK citizens’ rights agreement was signed in Berne by State Secretary Mario Gattiker and Chris HeatonHarris, a Minister at the Department for Exiting the European Union.

The signing marked the conclusion of the Swiss government’s ‘mind the gap’ strategy for securing relations with the UK after Brexit, with all agreements now in place and covering both deal and no-deal Brexit scenarios.

You’ll be able to complete the application form online, with support over the phone or in person if needed.

Trial phases including the current pilot have shown the process to be quick and straightforward in the vast majority of cases. When you apply, you’ll need proof of your identity (valid passport or national identity card) and your residence in the UK. We’ve updated the FAQs on our website to reflect the latest developments, so please visit www.eda.admin.ch/london/brexit in the first instance with any questions you have.

You’ll also find a link to a video Q&A in which Ambassador Fasel gave a detailed update and addressed questions covering many different personal circumstances and all Brexit scenarios. Whatever the outcome of the Brexit process, we remain committed to seeking the smoothest and strongest possible relationship between Switzerland and the UK. With the conclusion of the ‘mind the gap’ agreements, we have ensured continuity and are confident that we have laid the groundwork for a close partnership in the future.

EMBASSY OF SWITZERLAND IN THE UK 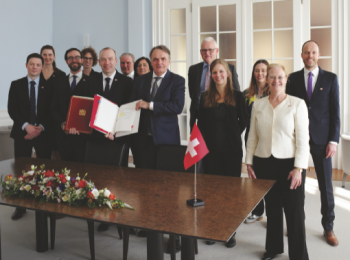 Photo: State Secretary Mario Gattiker and Chris Heaton-Harris, Minister at the Department for Exiting the European Union with their teams and the British Ambassador to Switzerland, Jane Owen, at the signature of the citizens’ rights agreement in Berne on 25th of February. 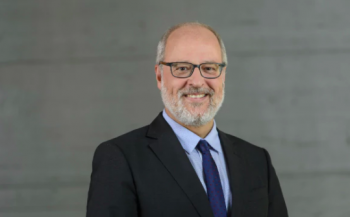 A TALK WITH THE AMBASSADOR: Brexit, what does it mean for the British and Swiss destiny in Europe?

THE 145TH ANNIVERSARY DINNER OF THE UNIONE TICINESE

On 8th February 1874 a group of Italian Swiss restaurant owners and waiters met to formally found a Benevolent Society, the Unione Ticinese.

145 years and one day later, on 9th of February, over 70 members and their guests met at the Swiss Embassy to celebrate the event with food, wine, music and, of course, a raffle! There were representatives of some of the original members’ families as well as descendants of other ‘old’ Anglo-Ticinese families. However there was fresh blood too in the form of Ticinesi who had settled in the UK in recent decades and people who had recently discovered their Ticinese roots, together with friends from other Swiss societies.

We were the guests of the Ambassador, His Excellency Alexandre Fasel, our Honorary President, and his wife Nicole Fasel-Rossier. Other guests of honour were Gran Consigliere Bixio Caprara, representing the government of Ticino, and Manuela Bechtiger-Salvade´and Giampietro Gianella of Pro Ticino, of which we are an associate member.

The dinner took place in the Embassy’s lecture theatre, adorned with the Society’s much-loved silk banner of 1924, to the backdrop of popular Ticinese tunes played by ‘Rolando e Lorenzo’ alias Rolando Rigotti and Lorenzo Bonati on the accordion and guitar. Each table had a white orchid, draped with the red and blue colours of Ticino, and a special eight-page commemorative menu. This, with the invitation which doubled as a raffle ticket, belong to a tradition stretching back to at least 1903. The meal was accompanied by abundant quantities of red and white Ticinese wine, from the Mendrisio house of Valsangiacomo.

After the main course, there were the speeches. The Ambassador spoke first, proposing the health of our guests, but also delivering a surprise. He summarised the contents of the British-Swiss accord that had just been concluded and would come into force once the UK left the EU: it represented a ‘first’, he said, and meant that the Swiss did not need to be worried should there be a No-Deal Brexit.

Bixio Caprara spoke about the ambitious development plans of the Federal Sports Centre in Tenero, for which he is responsible. He also had a surprise in the form of a video containing personal greetings to us, on our anniversary, from the Swiss Foreign Minister, Ignazio Cassis, himself a Ticinese.

Then Manuela Bechtiger-Salvadé toasted the Unione Ticinese on behalf of Pro Ticino and Giampietro Gianella presented our President with a handsome silver gilt medal of 2003 commemorating the centennial of canton Ticino.

A little later, Ian Giuliani thanked the organisers and, in a topical reference, reminded all present that the Unione Ticinese had originally been a society for poverty-stricken immigrants to the UK.

At the end of the meal the raffle, which included Swiss railway tickets, a luxurious hamper, a special Victorinox pen knife and vanity products, was drawn by Mme Fasel. After that it was back to music and dancing until well after 11 pm, with grappa lavishly and spontaneously supplied by the Ambassador. As a final flourish of generosity, every guest received a well-stocked goody bag as they departed.

Over the following days we received messages from some people who had never been to a Unione Ticinese function before, remarking on its exceptional ‘heart’ and warmth. This was perhaps the compliment that pleased the organisers most. The Unione Ticinese is no longer a Benevolent Society. The balance of its membership has altered over time, as has many of its activities, but if we lose our heart we shall no longer deserve to survive.

Keep up to date with the Unione Ticinese by visiting http://www.utl.org.uk/